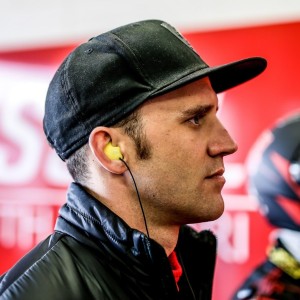 I was lucky enough to test the new game while at Circuit of Misano for the Blancpain Sprint Series and thought I’d give you all some initial feedback!

Being a massive Sim Racing fan I could not wait to try the game. I was a sim racer before I was a racing driver, so my expectations for this game are high.

First of all it needs to be said that their team is amazing, so receptive to feedback from all the pro-drivers and also genuinely enthusiastic about racing and the game itself. I could have spoken to them for hours about all aspects and they would have listened.

I got to speak with the sound guy and made a ton of suggestions on what we actually hear as drivers vs what you hear in onboard videos. I also learned how complex the rain system is and how it dynamically affects the grip on the track as it gets more wet or dry when chatting to the head of physics.

They had four demos for use on the weekend, I played two of them. The first was a hot lap session with a Ferrari 488 GT3 (same car I race) and the other was a wet race in a Mercedes AMG GT3 (a car I tested a few weeks back). Both demos were based at the Misano track.

The track accuracy was super impressive. I place high value on how close the track in the game looks to real life and I still believe that Gran Turismo is the undisputed king in this area. But what I saw in Assetto Corsa left me very impressed.

The curbs in the game look exactly like the curbs in real life and there were even track markings and reference points which existed in the demo that we use in real life.

The attention to detail that they’ve paid to the interior of the cars is also right up there with Gran Turismo. I loved that when I changed ABS settings, the hand of the driver moved to the central dash in the Ferrari 488. Just like we do in real life.

Engine sound and gear shift sounds were also spot on.

The car braked and handled as I have come to expect, behaving really well during cornering and responded similarly to over-eager throttle application. GT3 cars have a tendency to slide slowly then snap suddenly, especially during the final phase of corner exit and they somehow nailed this in the game.

Braking was good, the demo’s had a conservative front-bias setup and I could tell immediately. This is a good thing. The moment they gave me more rear bias I was able to manipulate the car in the same way I do in real life.

There is every reason to be excited for this game, it has the potential to be the best off-the-shelf sim racer on the market.

The primary issue is in the Force Feedback. I asked if they could add a bit more feeling in areas such as braking and understeer. When you brake in a GT3 car the sound of the ABS and the brakes is quite aggressive but you cannot hear it from onboard videos. It’s a loud grinding sound that could definitely be added to the audio and force feedback.

In the wet conditions (which are really good by the way) I wanted a bit more feedback from the wheel when you get understeer or when the fronts start to lock (this can happen, even with ABS on), just so we get a better idea of where the car is.

To their credit they said they still have a lot data to use to refine the feedback and a big update will be made for the next demonstration.

I cannot overstate how receptive the development team were to our suggestions and driver feedback. I think this is a critical factor to bringing this game as close as possible to the real thing.

If I was to score the game now it would be a healthy 8.5 out of 10. Areas that need more refinement are in the Force Feedback, AI aggression (apparently an easy fix and not really worth mentioning in this Alpha review) and Audio Feedback for auxiliary actions such as ABS and tire noise.

There is every reason to be excited for this game, it has the potential to be the best off-the-shelf sim racer on the market.